The area between Alicante in the north and Pilar de la Horadada in the south represents the Costa Blanca-southern region of the province of Alicante.

With 65km of stunning coastline, the South Costa Blanca region may not be as rugged as its northern counterpart, but it certainly doesn't fall short of beauty, with beautiful endless white sandy beaches as far as it can go. The beach of Guardamar del Segura is a perfect example of this.

We have properties to suit all budgets in the southern Costa Blanca, from Guardamar to Pilar de la Horada and in between the popular areas such as La Zenia, Campoamor, Cabo Roig, Playa Flamenca and the port town of Torrevieja to the south. What is also a beautiful area with a good investment climate is the Orihuela Costa.

Torrevieja is a city in the southeastern Alicante province of Spain, on the Costa Blanca. It is known for its Mediterranean climate and coastline. Boardwalks run along sandy...

The municipality of Benijófar borders Rojales and with its 4.36 km² it is one of the smallest municipalities in the region. His name in Arabic, yauhar, means...

Bigastro is a town in the Vega Baja region, in the south of the province of Alicante. It is very close to the city of Orihuela, the capital of the region, which has a wide...

Guardamar is one of the main tourist resorts of the southern Costa Blanca, along with Orihuela Costa and Torrevieja. Guardamar has 11km of coast in quite extensive plains...

La Finca is an exclusive residential area that extends around the La Finca Golf course of the same name. It offers high quality services such as the 5-star Hotel with Spa, a...

Las Colinas Golf & Country Club is located in Campoamor. This is located in the mountains surrounded by forests and fruit trees. The location is very private and quiet....

Torre de la Horada is located on the beaches of the Mediterranean Sea. The village belongs to the municipality of Pilar de la Horadada and has about 2,000...

About VistaBellaGolf resort: The urbanization has its own commercial zone with a supermarket, various restaurants & bars and excellent sports facilities, including padel...

La Zenia is one of the most popular areas of Orihuela Costa. Located between Torrevieja and Villamartin. There are the excellent beaches that have been awarded the Blue Flag...

Villamartin is a well-known place among tourists for its many restaurants and shops and access to the beach, La Zenia Boulevard, Villamartin Plaza. Villamartin, along with...

Pilar de la Horadada is the southernmost municipality on the Costa Blanca and has two major tourist areas, Torre de la Horadada and Mil Palmeras. It has an extensive and...

Guardamar is one of the main tourist resorts of the southern Costa Blanca, along with Orihuela Costa and Torrevieja. Guardamar has 11km of coast in quite extensive plains...

Dehesa de Campoamor is a village in the Orihuela Costa region in the municipality of Orihuela. It is located in the Costa Blanca South of the province of Alicante and in the...

Punta Prima is a typical Spanish tourist resort, located on the southern Costa Blanca within 30 minutes of two international airports, Murcia and Alicante. Right on the...

Los Altos on the Orihuela Costa is located just south of Torrevieja on the Costa Blanca in Spain. Los Altos is just 10 minutes from the award winning beaches of Punta Prima,...

Orihuela Costa Orihuela Costa is a coastal region located on the Costa Blanca in the province of Alicante. It is close to the border with Murcia, near La Manga and the...

Orihuela Costa is a coastal region located on the Costa Blanca in the province of Alicante. It is close to the border with Murcia, near La Manga and the beautiful Mar Menor....

San Miguel de Salinas is a Spanish town on the Costa Blanca South. The town is slightly elevated and therefore has an exceptional view of the salt lakes of Torrevieja and the... 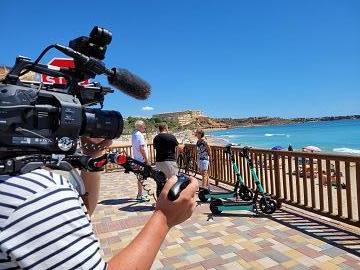